On July 12, 2022, the Tennessee Valley Authority (TVA) issued a request for proposals (RFP) for up to 5 GW of carbon-free electric capacity to potentially connect to the TVA grid by 2029. For comparison, TVA currently has over 14 GW of carbon-free electric capacity as of 2021, 87% of which is nuclear and hydro (from TVA’s latest 10-k). We at SACE welcome this as hopefully the first of many such RFPs on the way to decarbonizing the TVA grid on a timeline that limits the worst impacts of the climate crisis.

High-level overview of the RFP includes:

Green Energy, But for Who?


While TVA does not explicitly say what it is seeking to do with this solicitation, in the past TVA has used these kinds of RFPs to put together a book of projects that its large customers can look through if they are interested in entering into a Green Invest contract to fulfill clean energy requirements. TVA’s Green Invest program is modeled after contracts to provide solar to Google and Facebook, and since the program was initiated it has also included Vanderbilt University in Nashville and the Knoxville Utilities Board, one of TVA’s largest utility customers. Through this program, it is clear that TVA is being responsive to some of its largest single customers, but potentially at the expense of the rest of TVA’s customer base that does not receive the environmental or economic benefits associated with the projects that are reserved for particular customers.

TVA states in its latest quarterly filing with the Securities Exchange Commission (SEC) that “In recent years, TVA has issued request for proposals (“RFP”) in order to meet customer preferences and requirements for cleaner energy. TVA will procure the renewable energy and sell the resulting RECs to specific customers, allowing TVA to increase its renewable energy portfolio without additional costs to other TVA customers.” Since renewable energy costs continue to be both lower and less volatile than the cost of existing fossil fuel resources, TVA is adding additional costs to non-Green Invest customers by not contracting for these renewable projects directly and offsetting some of its expensive fossil fuel generation.

Good to Do Now, Would Have Been Better a Year Ago

Issuing an RFP to be able to identify the most cost-effective clean energy resources is an important step in decarbonizing the power sector, but with TVA having recently completed analysis that led it to conclude that new gas is a less expensive replacement for a retiring coal plant than a clean energy option, it seems this particular RFP would have been a lot more useful a year ago so that it could have informed TVA’s coal replacement analysis.

As SACE learned from requests to TVA through the Freedom of Information Act (FOIA), TVA’s coal replacement analysis primarily relied on cost assumptions from its 2019 integrated resource plan (IRP). Considering how much solar and storage costs have declined since 2018-2019, and how volatile gas price forecasts are today, a rerun of the coal replacement analysis would have a very different result. In fact, analysis shows significant savings from a clean energy option. 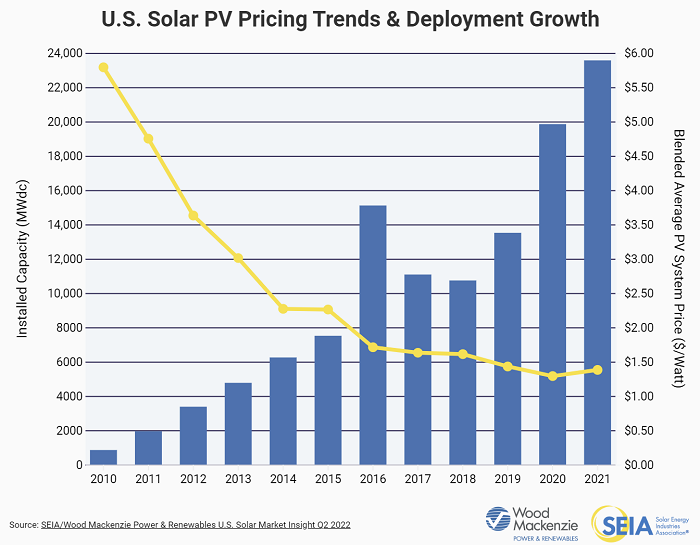 Since TVA has not made a final decision in how it will replace either the Cumberland or the Kingston coal plants, it should hold off on making these decisions until it is able to update its analysis with the results of this RFP and the latest fuel costs.

Results in Time to Inform the Next IRP


On the other hand, by issuing this RFP now TVA will have fairly recent pricing information for clean energy technologies that it can use in its next IRP, which is expected to start toward the end of 2022 or in 2023. An IRP typically uses generic forecasts for the cost of technologies like solar and battery storage, both technologies that have seen costs drop much faster than any forecast was able to predict. This is one reason SACE has been advocating for the practice of All Source Procurement (ASP), which in a way combines an RFP process with the IRP process. By using real-world price proposals and projects to develop portfolios through the least-cost planning process already employed by IRPs across the region, utilities can reduce risks associated with relying on bad forecasts and save customers money. When TVA states in this RFP that it “will use least-cost planning in all evaluations,” that sounds a lot like an ASP-style process.


The bottom line is that TVA needs much more aggressive, concrete goals that will help it reach net-zero emissions by 2050, which is what science has determined is needed to mitigate the worst effects of the climate crisis. Despite having achieved a higher emission reduction today, compared to 2005 levels, than many utilities, TVA is now lagging behind comparable utilities in commitments to take the next critical steps to decarbonize. For example, Florida Power and Light recently committed to 90 GW of solar and 50 GW of energy storage to achieve zero carbon emissions by 2045.

TVA has taken important steps in the past to reduce carbon emissions from its power generation. This RFP is an important step in continuing decarbonization, but it comes at a time that TVA is adding a significant amount of long-term fossil fuel power plants across its territory that can limit TVA’s ability to achieve zero carbon.

Hopefully the First of Many


Based on previous analysis, we estimate that TVA would need to add at least 40-50 GW of clean energy resources like solar, wind, and storage in order to get to zero carbon emissions across its system. This is in addition to deploying robust and equitable energy efficiency, rate design, demand flexibility, and distributed generation programs. So this RFP for 5 GW of carbon-free resources is a welcome step, and will hopefully be the first of many similar RFPs that will ultimately result in a carbon-free TVA grid on a timeline in line with limiting the worst impacts of the climate crisis.

Source: https://cleanenergy.org/blog/tva-issues-request-for-carbon-free-energy-proposals/
We use cookies to ensure that we give you the best experience on our website. If you continue to use this site we will assume that you are happy with it. Ok