As is often the case with Elon, at the end of the AI Day presentation today, there was a surprise announcement of a new product. In this case, it was a human-like robot with the FSD computer inside of it to direct its actions.

In Elon time, it will be on the market next year. In normal human time, probably two years later. Asked what kind of tasks the robot could do, it was envisioned that it could first be used for dangerous, boring, dirty work that humans do not really like (or “dangerous, repetitive, boring tasks”).

My first thought was: “hamburger flipper at McDonald’s.” It is simple, boring, dirty work in a hot environment. The robot on stage was actually a human ballet dancer. She might have been a hamburger flipper for a short time while attending the dance academy.

Elon Musk was very clear about the future he envisions with these robots. Physical labor would only be for those who like it, not because it’s needed. The consequence is a Universal Basic Income. People will still need to eat. With all physical labor taken over by robots, we have to distribute the revenue of the work done by the robots in a way that society keeps functioning and serves basic human needs across society.

It is not only the labor of the less educated people that is going to be taken over by robots. Surgeons are also high on the list for replacement by robots.

This is science fiction becoming reality.

While I am retired, I wonder: Will there be a robot to take my place as a grumpy old man, commenting on the imperfect world around us? 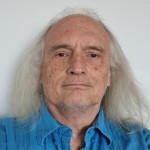 Grumpy old man. The best thing I did with my life was raising two kids. Only finished primary education, but when you don’t go to school, you have lots of time to read. I switched from accounting to software development and ended my career as system integrator and architect. My 2007 boss got two electric Lotus Elise cars to show policymakers the future direction of energy and transportation. And I have been looking to replace my diesel cars with electric vehicles ever since. At the end of 2019 I succeeded, I replaced my Twingo diesel for a Zoe fully electric. And putting my money where my mouth is, I have bought Tesla shares. Intend to keep them until I can trade them for a Tesla car. I added some Fastned, because driving without charging is no fun.