Solar-powered cars are automobiles that gain their electric power from self-contained solar panels. These cells harness energy from the sun and charge the solar battery that makes the vehicle run. This differs from the electric cars that are already on the scene. Existing electric cars charge using charging stations that are connected to the electric grid. It’s not as simple as just slapping some solar panels on these preexisting electric vehicles, however.

The intricacies of adding solar charging make it harder to bring solar-powered, everyday cars to market. There is, however, significant demand for eco-friendly products — 90% of Australian citizens prefer ethical and sustainable goods. Alternative energy sources are a large part of contributing to the overall healthy ecosystem. The ultimate goal is to switch completely from internal combustion to solar energy for everyday vehicles — It’s just about how quickly society can make that change.

Traditional internal combustion vehicles are well-known carbon emitters. Thankfully, there are plans to bring mass-market solar-powered cars into production. In fact, the first prototype was built in 1955 by General Motors — a 38.1-centimetre model called the Sunmobile. Although it never made it to the assembly line, it nonetheless showed some intent from auto manufacturers to embrace sun-powered products.

Now, the wishful thinking is a little closer to reality. In 2019, a student-run non-profit organisation in the Netherlands called Solar Team Eindhoven proposed the first mass-market solar car. Their initiative is backed by an established solar-car company called Lightyear. The Lightyear One — similar in appearance to a Tesla — is the first long-range solar vehicle. In fact, they claim you can “drive for months on one charge.” 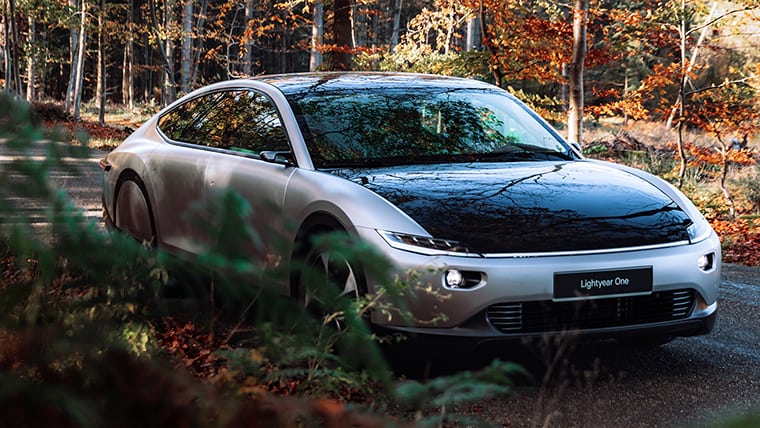 The solar-powered Lightyear One. 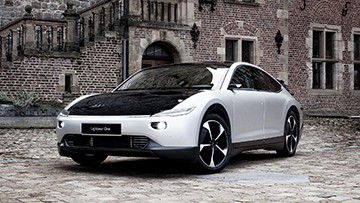 The futuristic Lightyear One. 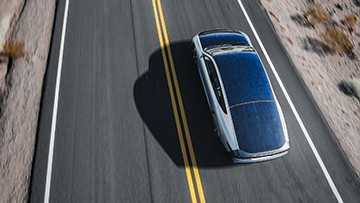 Solar panels on the Lightyear One.

Production was set to begin in 2021, and cars are expected to start delivery to consumers in mid-2022.

You can actually reserve your Lightyear One right now if you:

Currently, Tesla doesn’t manufacture solar cars, despite the Tesla Powerwall battery being able to hold a solar charge — and that fact that Tesla manufactures solar panels for home roofs. Elon Musk has, however, thrown around the idea that Tesla models could have solar panels one day. This will likely look like:

The current Tesla models would take too long to charge by the sun alone. However, this doesn’t mean that solar isn’t in the Tesla future.

The Aptera could be the easier-to-charge alternative. This futuristic-looking car:

This forward-thinking automaker utilises AI and 3D printing to produce the composite autobody. The intent of the company is to have the vehicles ready for production in 2021 and on the assembly lines, ready for delivery in 2022. You can also reserve your own Aptera if you:

The price fluctuates depending on how many panels you’d like to add, the colour of the vehicle, the size of the battery, and the wheel drive system. There are also package upgrades — including enhanced audio, pet kits, camping kits, and more. While it may be a while before we see the road completely covered in Aptera, it certainly offers a promising future.

How Solar Panels Can Power Cars

Solar panels, in general, convert sunlight into electricity using photovoltaic cells that capture energy from the sun. The excess power can then be stored in solar batteries for use outside of daylight hours. Solar batteries are also common in smaller devices, such as pathway lights or garden fixtures. However, solar panels are able to power cars in much the same way.

Most solar vehicles charge the car’s battery that then powers the motor. Sometimes, though, less-powerful vehicles will skip the battery and use energy from the sun to directly run the electric motor.

Benefits of a Solar-Powered Car

There are numerous, obvious benefits of running a car completely powered by the sun. The benefits of solar panels are vast — and even more so when attached to a car that would normally guzzle petrol or be powered by the electricity grid. Energy companies use nonrenewable, unclean resources, together with some renewables, to generate power. When you’re not hooked up to this grid:

Once the solar vehicle is manufactured — and this is typically done in an eco-conscious way — you don’t have to worry about paying for petrol or costly maintenance checks. The vehicle should pay for itself while simultaneously reducing the amount of pollution in the air. Solar vehicles don’t release harmful greenhouse gases into the atmosphere.

Potential Drawbacks of a Solar-Powered Car

The benefits of solar are plentiful for consumer vehicles. However, there are potential issues with everyday use. You must factor in:

While you will save money down the line, the upfront cost is likely to be a deterrent for many. It may also be a long time before these cars are widely available — however helpful they may be to the environment.

Deciding whether or not a solar-powered car is practical for you depends on your lifestyle and budget. You may have a long commute to work every day, or face some other complication that makes owning a solar-powered car difficult. You may look to schedule in charge time while at work or at home. You can also, learn how to tilt your solar panels for peak efficiency.

The benefits of solar-powered cars clearly outweigh the potential issues that may arise. If we come together and embrace a solar-run future, the world will be better for it. It depends on us, the consumer, to overcome the obstacles in order to reap the solar benefits.