Solar panel optimisers are devices that attach to all, or a particular panel, and allow it to function independently of every other module in the series. Solar optimisers are not a form of solar inverter. Rather, they work in tandem with a string inverter and they are also called DC optimisers. The key advantage of solar panel optimisers is that if a panel underperforms, it does not bring down the performance of the entire system.

There are two popular solar optimiser brands available in Australia, they are:

Tigo Energy is a Californian company and have been around the solar industry since 2007. Tigo optimisers have two big advantages over their competitors; they can be matched with any panel and inverter and, you do not have to install them on every single module.

Bypass diodes help reduce shading and obstruction issues, but they are not as effective as solar optimisers. A solar panel is typically split into three columns of connected cells called ‘cell strings’. Bypass diodes are attached to each cell string. If one cell string is obstructed, it will not bring down the entire output of the panel, instead, the obstructed cell string is bypassed. 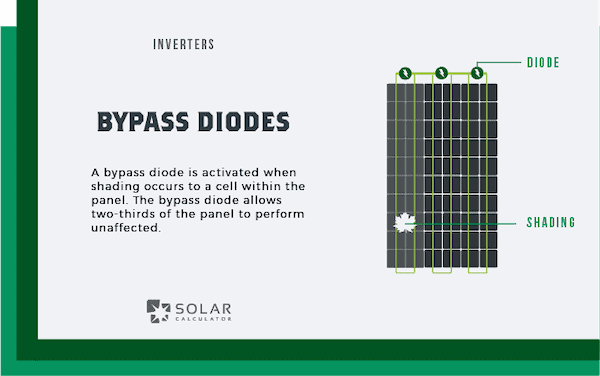 While bypass diodes are useful, they are not as effective as DC optimisers, because the system’s production is limited to the output of the compromised panel.

There are several benefits that DC optimisers can bring to a solar system, and they are similar to those of micro inverters, they include:

Solar optmisers can reduce the effect of shading and obstruction

The major benefit of adding solar panel optimisers is that they can reduce the impact of shading or obstruction from foreign materials. Without any optimisation, if one panel is impacted by shading, it will impact all of the panels in the series and reduce the output of the system. A DC optimiser allows the panel to act independently of every other panel in the series, and it will not bring down the entire production of the system.

Solar optimisers can be particularly useful for installations where the modules are positioned in different orientations.

Optimisers do not need to go on every panel

You can choose to install Tigo optimisers on only those panels that are likely to be affected by shading or some form of obstruction. This can reduce the cost of the install. However, it does not provide a defence against other possible causes of panel inefficiency like: panel mismatch, temperature variances, soiling and module damage.

Optimisers are useful when upgrading your system

Solar optimisers are a useful addition if you decide to increase the size of your existing system. The optimisers allow the new modules to operate at their maximum output without being hampered by the older, lower producing panels.

Solar optimisers are typically an add-on and therefore they add to the overall cost of a standard system. Optimisers can add as much as $1,600 – $2,000 to the cost of a 6.6kW system.

Source: https://solarcalculator.com.au/solar-optimisers/
We use cookies to ensure that we give you the best experience on our website. If you continue to use this site we will assume that you are happy with it. Ok