Adding an organic matter power source to a solar energy unit could provide 100% heating for a single-story home during the coldest months of the year and help the environment. In the warmer months, the system could generate electricity surpluses that can be sold back to the grid.

In Journal of Renewable and Sustainable Energy, published by AIP Publishing, researchers in China and the United States outline a computer simulation model addressing the challenge of solar power's inherent intermittency by adding biomass as another renewable energy source to advance a reliable, affordable heating solution while reducing carbon dioxide emissions.

"We demonstrate how this hybrid system provides a cleaner, more energy-efficient heating solution than fossil fuel in single-family homes," co-author Gaoyang Hou said. "The system would be convenient in rural communities, where farms have large amounts of biomass in the form of agricultural waste that can be combined with solar power to close the urban-rural electricity gap and help the environment in the process."

The proposed solar-biomass hybrid system is based on distributed multi-generation technology that integrates photovoltaic-thermal (PV/T) and biomass power sources.

Biomass is produced from renewable organic matter, like corn husks, nut shells, wood pulp, and food and animal waste. A PV/T system, composed of PV panels and thermal collectors, is an emerging technology that converts solar energy into both heat and electricity with higher energy conversion efficiency.

Studies on emerging decentralized hybrid systems have focused on neighborhoods and commercial greenhouse farms. The researchers evaluated their system based on the heating needs of a single-story cottage from November to March in northwest China, where temperatures in winter can dip below minus 20 degrees Celsius (minus 4 degrees Fahrenheit).

"For the entire heating season, solar power predominates the energy supply side, with the biomass energy generation kicking in when needed to make up the energy deficit," co-author Lei Xu said.


They created their simulation model in TRNSYS (short for transient system simulation tool), a modular thermal system software used to assess the performance of thermal and electrical renewable energy systems.

The researchers are developing a solar-biomass system model to meet heating and cooling demands of a small commercial building and, if successful, plan to develop a prototype for experimental testing.

Research Report:"Modeling and assessment of a novel solar-biomass based distributed multi-generation system" 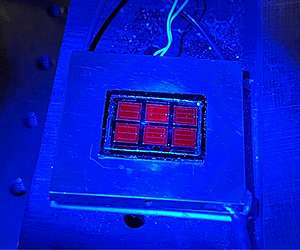 NREL creates highest efficiency 1-sun solar cell Golden CO (SPX) May 27, 2022 Researchers at the U.S. Department of Energy's National Renewable Energy Laboratory (NREL) created a solar cell with a record 39.5% efficiency under 1-sun global illumination. This is the highest efficiency solar cell of any type, measured using standard 1-sun conditions. "The new cell is more efficient and has a simpler design that may be useful for a variety of new applications, such as highly area-constrained applications or low-radiation space applications," said Myles Steiner, a senior scient ... read more