Materials PV solar panels use to turn sunlight into electricity

Photovoltaics are all about converting sunlight into electricity that we can use to power our homes and appliances. Therefore in order to pull off such a feat, PV systems rely on panels that capture the light of the sun. As a result, over the years, various different materials have been used in order to capture the sun’s rays. Let’s take a deeper dive into these materials and see how they differ from one another. 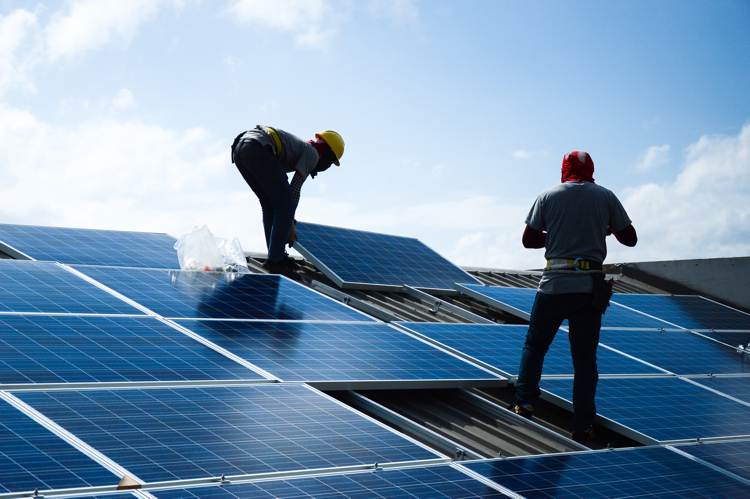 Firstly, the most common type of PV panel semiconductor material you would typically find is a silicon. On top of their good efficiency in absorbing sunlight, crystalline silicon cells are cost-efficient and long-lasting. Consequently with life expectancies of around 25 years and above, these materials really make solar PV systems attractive investments for prospective buyers.

These materials work by sandwiching thin film semiconductors between panes of glass. Consequently, these thin-film variants are heavier than crystalline panels, which only use one pane. The three sections below outline and describe the three main thin-film semiconductor materials. They are:

CIGS – Sometimes also referred to as CI(G)S or CIS cells, CIGS is short for copper indium gallium selenide. These thin-film solar cells feature a high absorption coefficient, making it a very efficient material. One drawback is that, as you might derive from the name, it is composed mainly of four different elements. As a result, there is a certain level of complexity involved in the process.

CdTe – For a number of reasons, Cadmium telluride is cost-effective. CdTe PV tech is accordingly cheaper than multicrystalline silicon solar cells. Furthermore, PV systems relying on CdTe use less energy when it comes to production. Some cons include the waste byproducts from production and post-disposal. For instance, Cadmium is insoluble in water and is toxic.

Amorphous silicon – This material has been in use in solar cell technology for a while. However, with the emergence of other materials such as the two mentioned above, its popularity has waned a bit. Nevertheless, amorphous silicon still sees a lot of use in large-area solar. In particular, the thinness of the material allows for stacking, with each layer tuned to work with different light frequencies. However, this can be a costly process for manufacturers.

These so-called third generation materials are thin-film technologies that are currently being explored or developed for photovoltaic applications. These include a number of organic materials and other compounds and inorganic substances.

Many are not yet viable for commercial use due to a number of factors. Sometimes, one material is not efficient enough at absorbing sunlight. Other times, stability and manufacturing factors come into play. Still, they are worth exploring for the promise they hold as potential low-cost and high-efficiency cells.

The future of home solar energy

Today, commercial solar PV cells are mainly silicon variants. Hopefully, we will see more materials that are suitable for use in solar power applications. The result will be to allow manufacturers to offer more options. In conclusion, what matters is that there are affordable and efficient ways to get renewable energy into the hands of consumers.

Let us show you how you too can benefit from these new developments. Contact Us at Renewable Energy Corporation for in depth answers to all your questions about home solar energy

Source: https://renewableenergysolar.net/materials-solar-panels-use-to-turn-sunlight-into-electricity/
We use cookies to ensure that we give you the best experience on our website. If you continue to use this site we will assume that you are happy with it. Ok