How to Use Solar Panels

The best way to use solar is to run your household appliances when your solar panels are generating electricity. Ideally, you want to minimise the amount of electricity your system exports to the grid, and instead use solar energy to power your appliances directly. 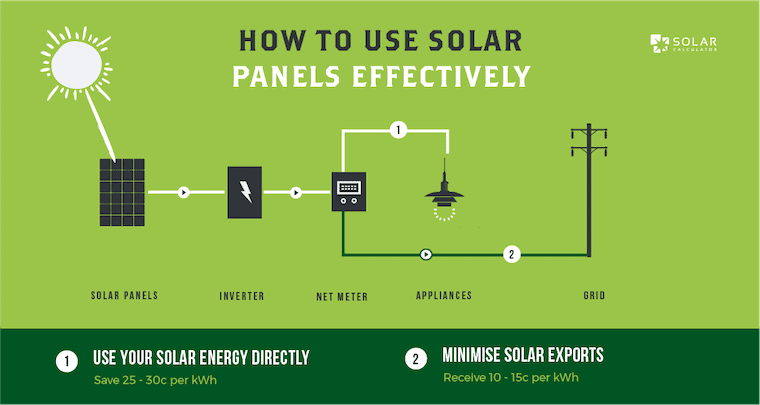 Minimise solar exports to the grid

The Best Time to Use Electricity With Solar Panels

Solar power systems typically generate power from 8am – 5pm with the best output occurring between 10am – 3pm; though it changes with the season. Therefore, best time to use electricity with solar panels is between the hours of 10am – 3pm.

However, typically, households do not use high amounts of electricity during daytime periods when panels are generating energy; instead, energy consumption is highest during the peak periods between 7 – 9am in the morning and 4 – 7pm in the evening. If you are on a Time of Use (TOU) electricity plan, the peak periods are also when the cost of electricity is at its highest.

When to Use Electricity from Your Solar Panels

The best time to use electricity generated from solar panels may differ depending on your roof orientation, the season and your electricity plan.

In Australia, it is typical best to position your panels to face the north, where the will receive the most sun. However, it is not always possible to do orient your panels to the north. Many rooftops have an east/west orientation that on average, will not generate as much solar power per day.

The Upside to East/West Orientation

There is one big upside to an east/west orientation, that is they typically generate power during peak usage periods at either end of the day. A professional working couple typically consumes high amounts of power during peak periods and can experience good savings and payback on a solar system because it generates power when they need to use it.

If your panels face to the east, the best time to use electricity from your solar panels is during the morning hours.

If your panels face to the west, the best time to use electricity is in the late afternoon.

To properly size your solar system, you need to get a handle on when you use your electricity throughout the day. This pattern of consumer behaviour is your electricity load profile and, it typically varies from season-to-season. Your load profile is another key variable when maximising your savings from solar panels.

Any load profile that uses electricity during the hours when your solar panels are generating power is the most effective.

Habits Change Once You Purchase Solar

Many customers report that their habits change once they install a solar system as they are conscious of when their system is generating power, and when they are using electricity. Aligning your electricity consumption with the power generation from your system is the best way to use your solar panels.

Source: https://solarcalculator.com.au/how-to-use-solar-panels/
We use cookies to ensure that we give you the best experience on our website. If you continue to use this site we will assume that you are happy with it. Ok