Floating Solar Farms Are Taking The World’s Reservoirs By Storm

Photovoltaic solar panels are wonderful things, capable of capturing mere light and turning it into useful electricity. They’re often installed on residential and commercial rooftops for offsetting energy use at the source.

However, for grid-scale generation, they’re usually deployed in huge farms on tracts of land in areas that receive plenty of direct sunlight. These requirements can often put solar farms in conflict with farm-farms — the sunlight that is good for solar panels is also good for growing plants, specifically those we grow for food.

One of the more interesting ideas, however, is to create solar arrays that float on water. Unlike some of the wackier ideas out there, this one comes with some genuinely interesting engineering benefits, too!

Not As Crazy As It Sounds 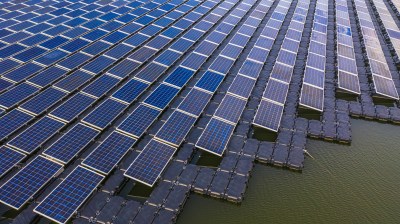 Floating solar arrays have better efficiency than their land-based counterparts by virtue of the fact that the water keeps the cells cooler. (Adobe Stock photo.)

“Floatovoltaics”, as they like to be known, come with significant engineering benefits relative to typical land-based installations.  One of the primary benefits is that of cooling. Solar panels, like many other electrical devices, benefit from being kept in a nice cool temperature range. Of course, being exposed to the sun means that, when generating electricity, solar panels are in fact forced into operating at elevated temperatures. With the average commercially-available photovoltaic panel hitting a peak efficiency of only around 20%, and only roughly 1,000 W/m2 available from the sun, solar panels are already up against it when it comes to producing decent amounts of electricity. The estimated efficiency benefit from floating a solar array on water is on the order of 5-6% according to researchers from the Institute for Energy Technology in Norway; certainly nothing to sniff at. Fully immersing panels in water has shown even greater improvements, up to an 11% boost in efficiency in some tests.

The benefits of floating solar panels don’t end there, either. When floated on a reservoir, for example, solar panels can shade the water course, reducing evaporation. Proponents suggest that this effect can save up to 90% of water that would otherwise be lost to the air in dry climates, through a combination of shading as well as reducing the impact of wind. The lower levels of light reaching the water also have the benefit of reducing algal growth as a further bonus.

For these reasons, floating solar is most often proposed to be colocated with pumped hydroelectric storage dams. These facilities rely on storing large amounts of potential energy in water, and any water lost to the atmosphere is water that can’t be used to generate electricity later. As a further benefit, these facilities already have infrastructure tying them into the electrical grid, making wiring up solar generation more cost-effective compared to developing arrays at greenfield sites.

Indeed, perhaps the biggest benefit often cited when talking about floating solar is that it reduces the need to secure large tracts of expensive land. Instead, existing watercourses like reservoirs can add solar, providing electrical generation to the grid without needing any extra footprint on the ground, barring a few utility boxes.

Floating solar panels on water also has the benefit of reducing the environmental impact and waste of cleaning operations. Rather than having to pump in clean water to wash panels as in a land-based installation, a floating array can simply be cleaned with the very water it is floating on. Little of that water need be lost either, as it can simply run back down off the panels.

There are drawbacks to floating solar installations, however. They must be designed carefully to manage and avoid corrosion wherever possible, as the wet environment can be harsh on cabling, framing and components. This is only compounded in salt-water installations, which increase the likelihood of damaging corrosion further. Of course, corrosion is a manageable problem, with all manner of freshwater and seawater hardware having been designed to withstand these environments. However, it adds cost and time to deal with these problems that aren’t such an issue in a typical land-based installation.

The array itself must also be designed and assembled in such a way as to not only float, but also resist the dynamic forces of being on the water. In inland reservoirs, this can involve being blown around or rocked by small waves kicked up by the wind, or even dealing with rocking, splashing or spray from water inlets when installed with pumped hydro. Off-shore applications are possible too, but locations must be chosen carefully to avoid tidal forces and weather from destroying the hardware, as demonstrated by the destruction of the Yamakura dam in 2019.

The Future Is Already A Reality

Far from a pie-in-the-sky thought exercise, floating solar arrays are actually already in use around the world. The biggest installation presently operational is the 320 MW installation in Dezhou, China. The floating array is expected to generate 550 million kWh of electricity per year, located in a reservoir near to the local coal power plant. It’s also colocated with a 100 MW wind farm and 8 MWh of battery storage on site.

It’s not a one-off facility, either. Projects have been undertaken all over the world, from a 6.3 MW installation in London to the 4.78 MW Healdsburg, California array that claims to be the biggest in the United States.

However, the biggest projects on the cards are in Asia. South Korea plants to build a gigantic 2.1 GW solar farm floating in the Yellow Sea. Expected to cost on the order of $4 billion USD, the project will span an area of 7,000 acres and feature 5,000,000 solar modules to generate its peak output.

Meanwhile, an Indian project hopes to construct a 600 MW floating solar project in the Omkareshwar Dam. The project hopes to begin power generation by 2023, exceeding the 520 MW capacity of the hydroelectric power station colocated at the site. The dam itself primarily serves to store water for irrigation purposes, with the solar installation likely to maintain much more water in the reservoir due to reduced evaporation.

Installation of floating solar is ramping up year-on-year as the technology matures and various jurisdictions see the benefits to be had. With the promise of generating more power, more efficiently without requiring more land purchases, it’s hard to deny the benefits of floating solar. Expect it to spread rapidly to reservoirs and calm coastal areas near you – presuming you live somewhere sunny!