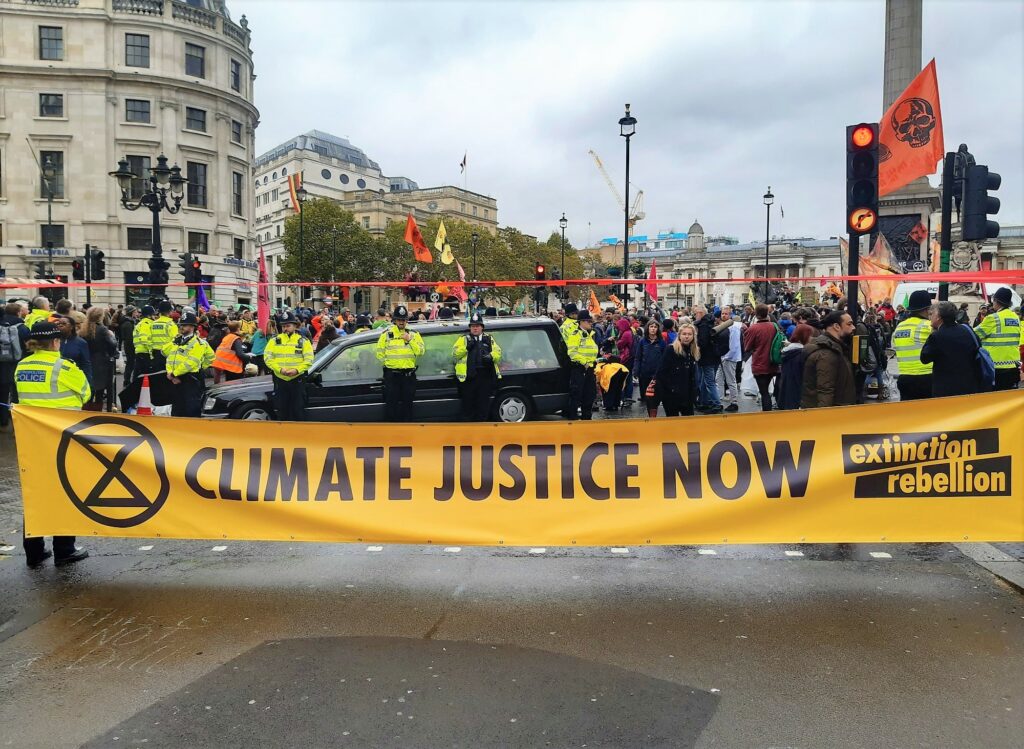 The environmental activist group Extinction Rebellion (XR) is planning a series of protests targeting the City of London to demand an end to investments in fossil fuels around the world.

The campaign group’s “Impossible Rebellion” is expected to see thousands from across the country travel to London’s financial district for at least two weeks of marches and occupations, starting on Monday 23 August in Trafalgar Square.

It comes as XR protesters held a demonstration at Fawley Refinery in Hampshire, the biggest oil refinery in the UK, calling for an end to investment in fossil fuels.

At a press conference today, XR Co-Founder Clare Farrell said: “We will be targeting the City of London because it’s time people understood the role it plays in contributing to climate change.”

Anneka Sutcliffe of XR’s “Actions” team named the Bank of England, Barclays, and HSBC as likely targets for protest.

Lawyer and anti-airport expansion campaigner Tim Crossland said: “The City of London is the arch funder of the carbon economy.”

He noted that BP, Shell, Glencore, Anglo-American, Gazprom and Rosneft all have a presence in the City, and that many UK shareholders make money from fossil fuel projects which are causing damage around the world.

In March DeSmog revealed that 80 percent of board members at the UK’s five biggest banks – Barclays, HSBC, NatWest, Lloyds and Standard Chartered – have links to environmentally damaging companies, either as current or previous advisors or employees.

Sutcliffe said the group had seen a 40 percent increase in its supporters recently, sparked by the publication of the latest UN climate report, flooding in England and Wales, and the upcoming COP26 climate summit in Glasgow.

She said the protests, which could last beyond the initial two weeks, would also be a celebration, with music and dancing, and themes including nature, animal rights, and global justice. There will also be “digital actions” online for those who cannot attend in-person protests due to Covid.

XR will also have a presence at a “Kill the Bill” protest this Saturday against the Police, Crime, Sentencing and Courts Bill, which would allow police to ban disruptive protests.

When asked by journalists, Sutcliffe said there were currently no plans for the protests to target public transport. However, she said: “We do expect our protests to be disruptive. It’s civil disobedience.”

XR Police Liason Paul Stephens said the Metropolitan Police are aware that protests are happening, though they have not been told details to avoid a heavy-handed response.

When asked by DeSmog about the protests’ specific demands, Farrell said the main demand is “to halt all new investments in fossil fuels”, as the International Energy Agency has said is needed to meet the Paris Agreement targets.

Earlier this month, the UN Secretary General Antonio Guterres said the latest IPCC report “must sound a death knell for coal and fossil fuels, before they destroy our planet”.

The XR panel called on the media to play a positive role and “tell the truth” about climate change. A study out this week found that right-leaning newspapers in the UK had some of the least accurate reporting on climate change between 2005 and 2019, with the Daily Mail and the Telegraph “well behind the curve”.

The panel also addressed the push by backbench Conservative MPs and right-wing media outlets to highlight the costs of the UK’s net zero target in the hope of blocking government climate action.

Dr Charlie Gardner, a lecturer on Conservation Science at the University of Kent, said climate science deniers had moved on from outright denial to “predatory delay”, where they try to put off action so companies can keep making money from fossil fuels.

He added: “Of course decarbonisation will cost money, but everything costs money. Schools cost money. Hospitals cost money. None of these things are optional.”

Crossland added: “It’s embarrassing to say it’s too expensive to save our planet. It’s crazy, isn’t it?

“There is an extremist ideology in the Conservative Party that science will have to give way to the market – to political economy.” He said there was a debate being had within the party about this with some recognising action is needed.