Despite Rising COVID-19 Cases in Children, Louisiana Parents Push Back Against the Governor’s Mask Mandate

Louisiana remains the number one state in the country for new COVID diagnoses per capita, according to the latest data released on August 16. Louisiana’s Democratic Governor John Bel Edwards warned that while the state’s dubious distinction has led to an upswing in people getting vaccinated, it is doing little to quell push-back against a temporary mask mandate he put in place on August 4 that includes mask requirements in public schools.

He added that the majority of people hospitalized and dying from COVID-19 across the state were not vaccinated.

The state’s Republican Attorney General Jeff Landry meanwhile continues to push back against the governor’s latest regulations put in place to stem rising COVID cases while hospital officials say the state’s healthcare system is on the verge of being overwhelmed.

The Baton Rouge Advocate reported that Landry advised his employees in an email that they could use state laws to claim either a religious or philosophical objection to the mask mandate for students — and to a vaccine if one is required.

Landry also issued an opinion stating that the Louisiana State Board of Elementary and Secondary Education (BESE) should instead be the one setting rules governing COVID-19 safety protocols like mask requirements, challenging the governor’s  authority to set his own rules. 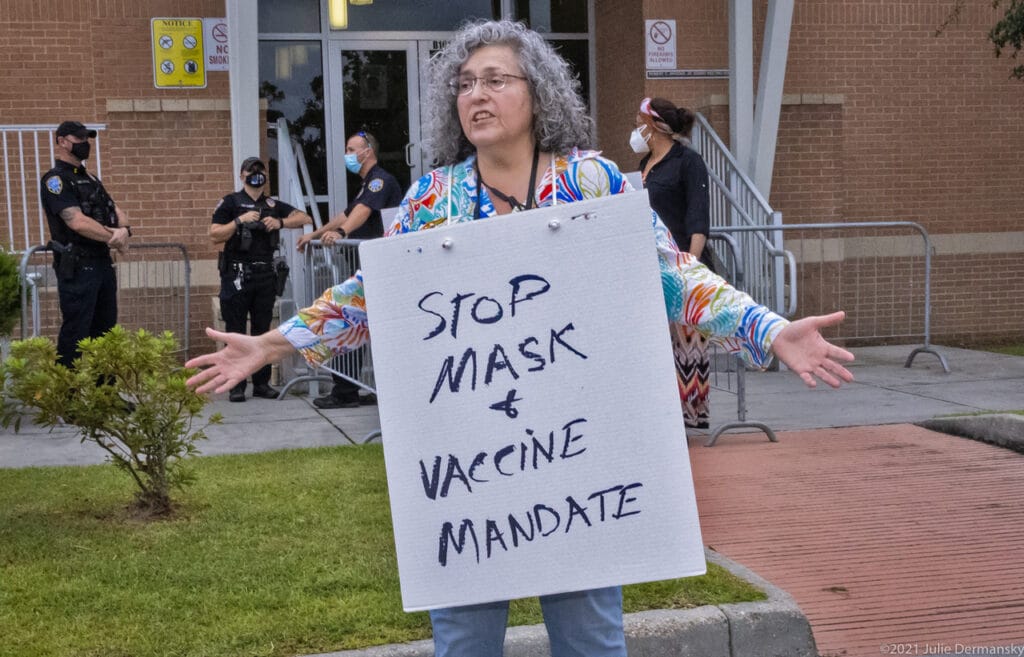 Roxana Buckingham protests Louisiana’s mask mandate outside of the Robert Brooks Educational Center in Slidell where a St. Tammany School Board meeting was held on August 12. Credit: Julie Dermansky

Landry’s statements come as parents in conservative school districts started protesting against the state mask mandate at school board meetings this month. And in St. Tammany Parish, a suburban area near New Orleans, a protest against mask and vaccine requirements and billed as a ‘Freedom Rally’ was held on August 14, following two heated school board meetings, where parents expressed outrage that their children were required to wear masks to school.

The rejection of scientific authority has become a hallmark of, and cultural signal among, many in conservative circles. What is unfolding in Louisiana mirrors a larger trend across the nation as misinformation levels and conspiracy theories have exploded during the pandemic, stoked by former President Donald Trump and often amplified by many of the same people and organizations funded by the fossil fuel industry and tied to climate science denial and misinformation, as DeSmog has reported.

For instance, Landry, like Trump, has called climate change “a hoax,” and in his Congressional career, received more than a half million dollars from the oil and gas industry. The August 14 ‘Freedom Rally’ in Mandeville is a prime example of the cultural-political lines now being drawn around acceptance of scientific authority when it comes to public health — and the event itself was organized by a group tied to Trump and the petrochemical billionaire Koch family. 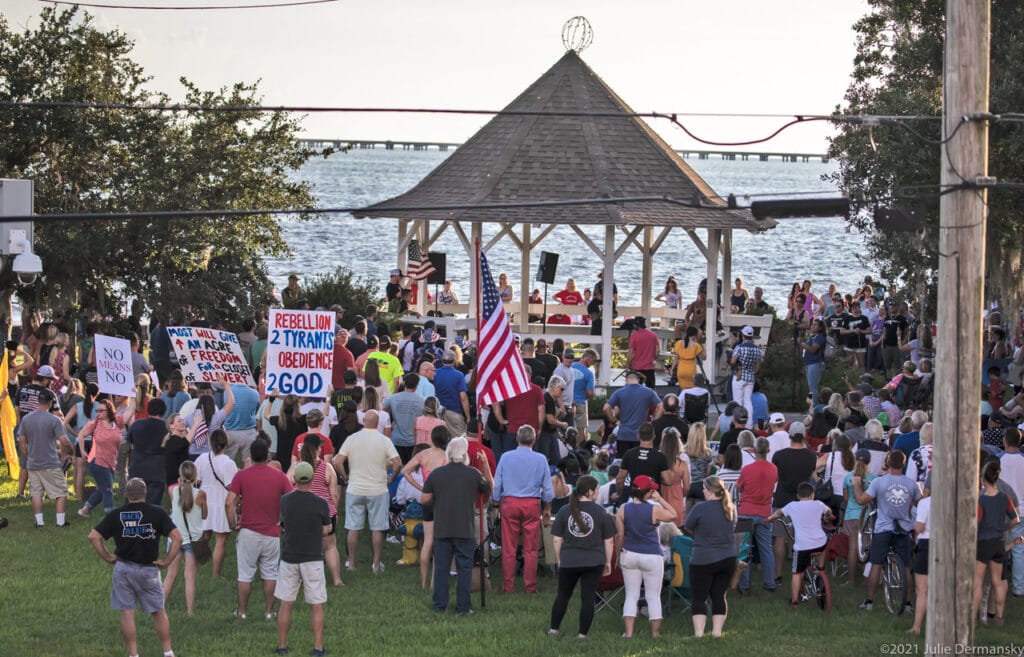 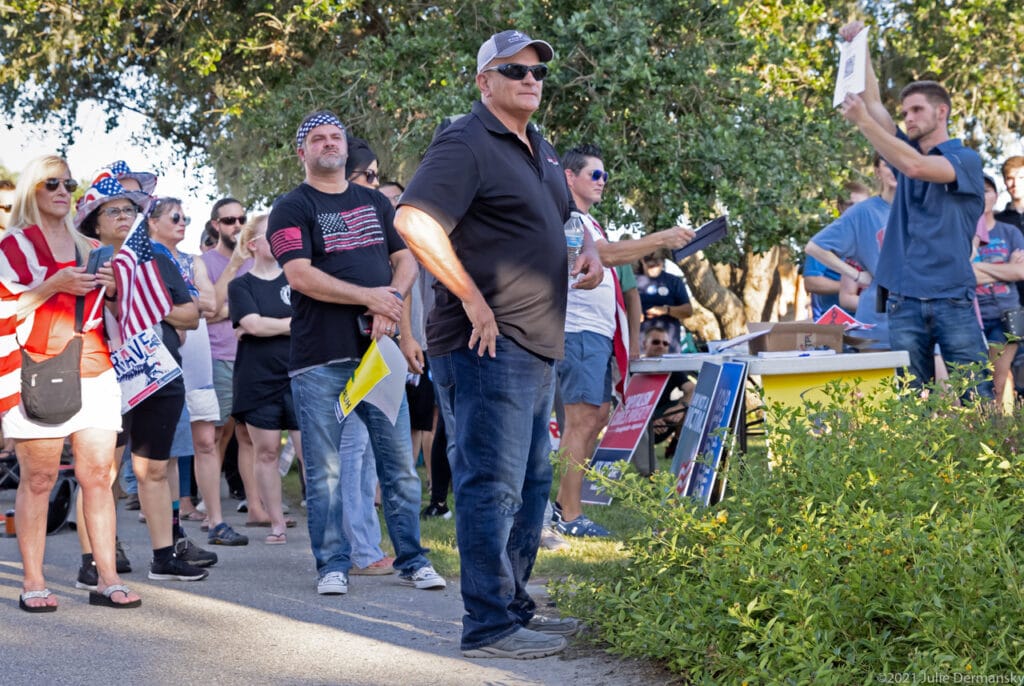 One of the speakers at the anti-mask rally was Republican Louisiana State Rep. Danny McCormick, a staunch conservative. Last year, McCormick  made international news after posting a video titled “Masks Aren’t Bad; Mask Mandates Are,” in which he said that people who refuse to wear face masks will start being “painted as the enemy” like “Jews in Nazi Germany.”

Pivoting from Nazi Germany references to racial injustice in America, McCormick told a reporter with ABC affiliate WGNO at the rally that “We’re facing discrimination like we did back in segregation. We have two groups, the vaccinated and unvaccinated and the mask and not mask. We’re pitting those two groups together and liberty is my solution.” 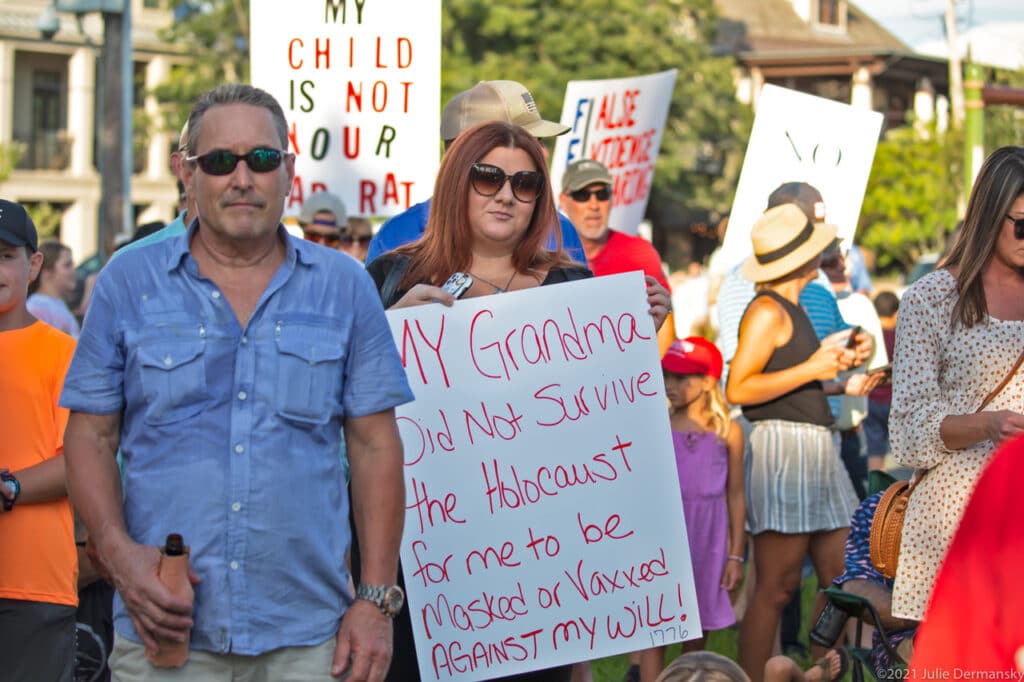 Kristen Gregory of Slidell holds a sign at a protest against mask mandates and required COVID-19 vaccinations in Mandeville on August 14. Credit: Julie Dermansky 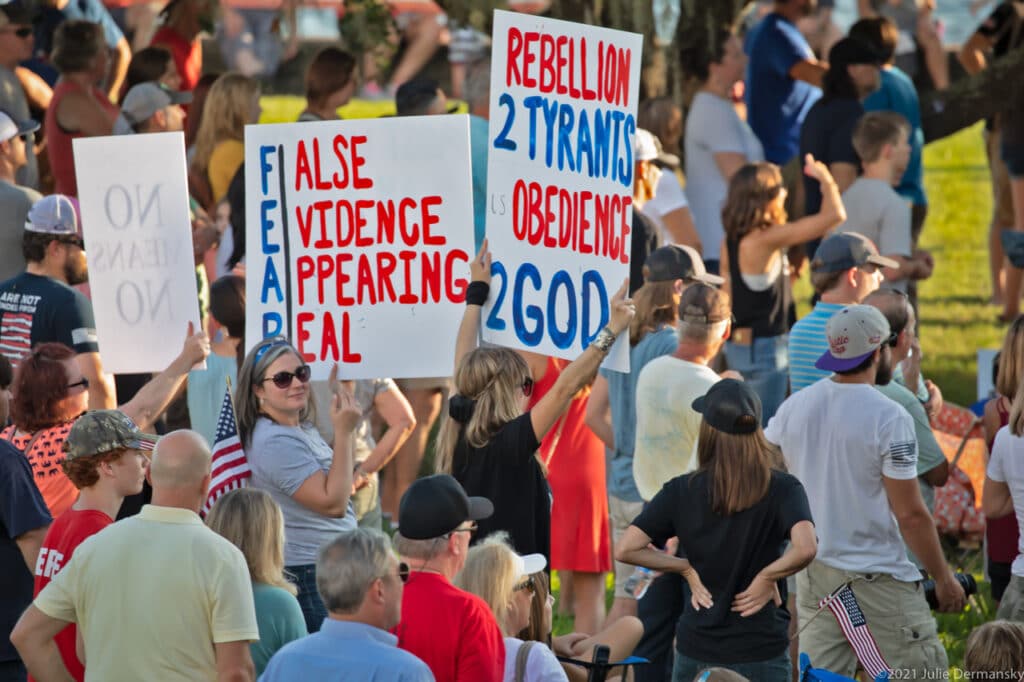 WGNO’s report on the rally pointed out that 350 feet away from where the protest  took place was a makeshift memorial for COVID-19 victims with 566 white flags, each representing a St. Tammany Parish resident who died from the disease.

“I guess we will have to see if that becomes a super-spreader with nobody masked up,” the anchor said at the close of the TV report. 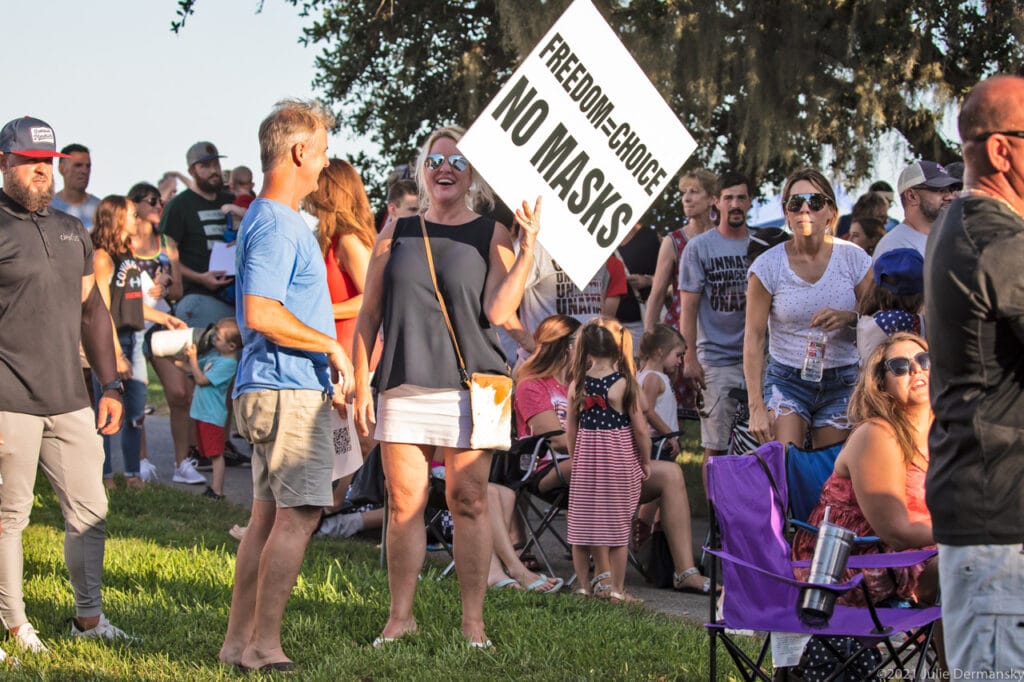 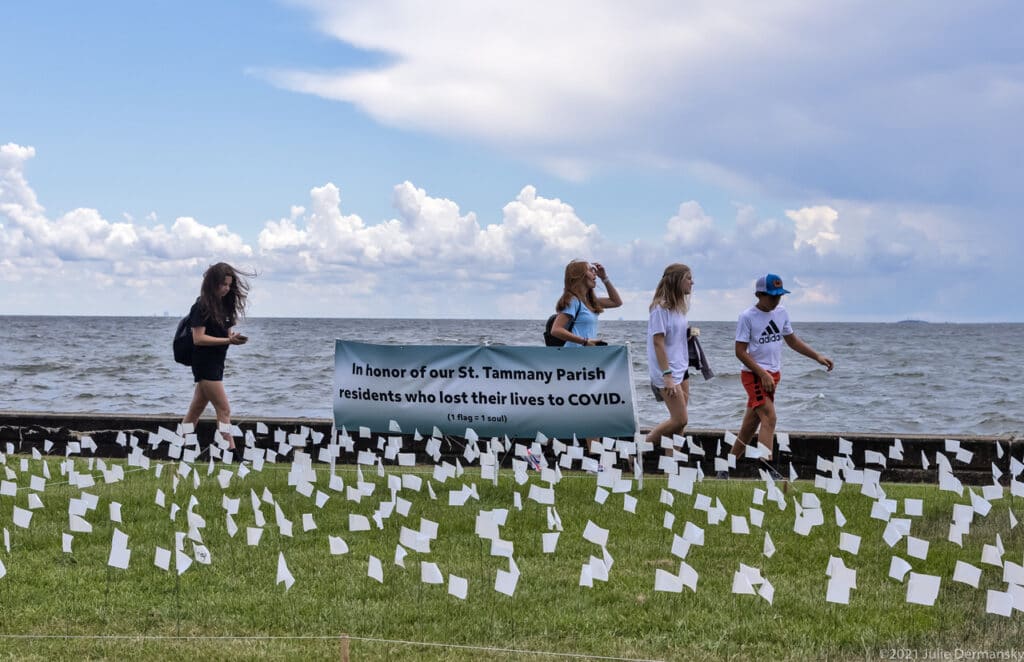 There were, however, a couple people wearing masks at the event. I was one of them. Despite McCormick’s call for acceptance toward those who want to wear masks as well as those who do not, I didn’t feel much acceptance for my choice in that crowd. As I documented the event, I was repeatedly asked why I was wearing a mask and was lectured about how the vaccines don’t work and that masks offer no protection at all. 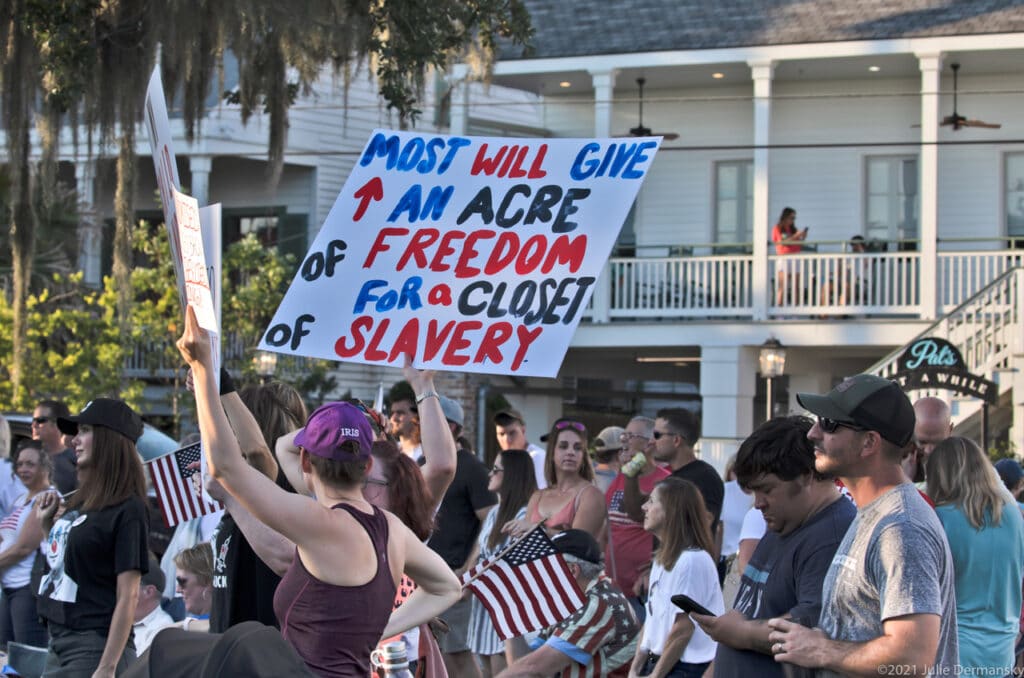 People gathered in Mandeville at the lakefront during an August 14 ‘Freedom Rally’. Credit: Julie Dermansky 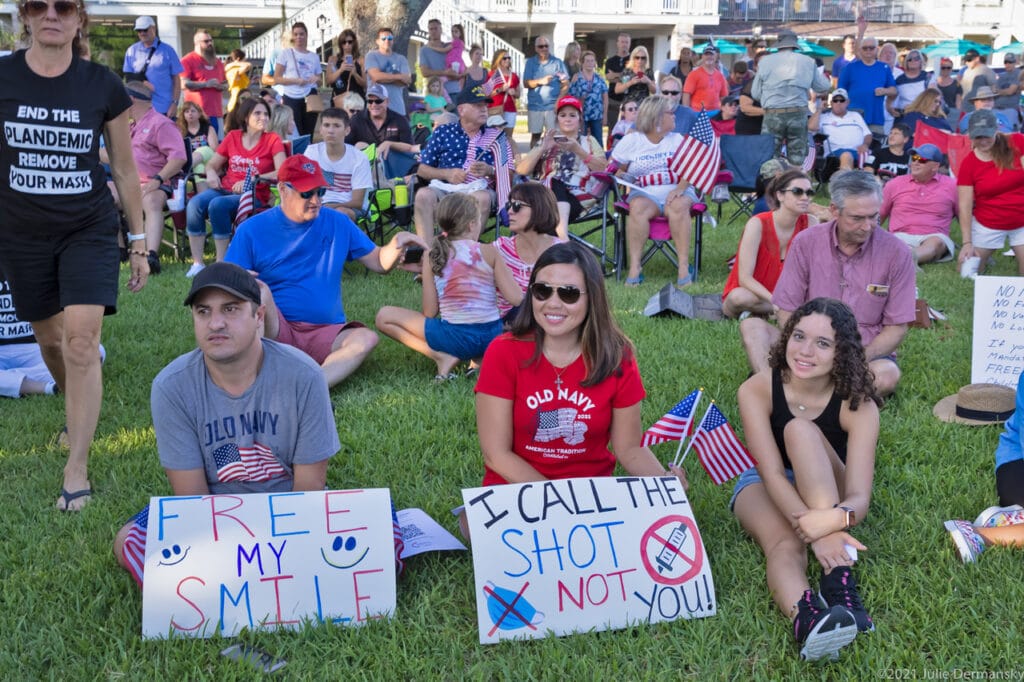 People gathered at the ‘Freedom Rally’ in Mandeville on August 14. Credit: Julie Dermansky

The event was organized by Turning Point USA (TPUSA), a youth conservative activist organization founded in 2012 by Charlie Kirk, a longtime  supporter of Donald Trump, who continues to falsely claiming Biden’s victory over him in the presidential election last year was fraudulent.

As DeSmog previously reported: “According to its website, TPUSA’s ‘mission is to identify, educate, train, and organize students to promote the principles of freedom, free markets, and limited government.’ They claim a presence on over 1,000 college campuses and high schools across the country, and label themselves the largest and fastest growing youth organization in America.”

“The Leadership Institute is an official partner of TPUSA, and has received at least $246,389 from Koch-related foundations between 2003 and 2015,” according to previous reporting by DeSmog. “In addition to its ties with the Koch-funded Leadership Institute, Turning Point USA has received support from a range of Koch-tied groups. In 2017, The Foundation for Economic Education (FEE) sponsored TPUSA’s Student Action Summit. FEE is a partner organization of both TPUSA and the Charles Koch Institute.”

TPUSA has also been criticized for its connections to alt-right and white supremacist groups, according to DeSmog

Turning Point USA flourished under the Trump administration. It is listed as a supporting sponsor of this year’s Conservative Political Action Conference (CPAC). Turning Point USA’s 501(c)(4) nonprofit arm, Turning Point Action, was one of the groups that helped organize protests in Washington, D.C., on January 6, according to Open Secrets. 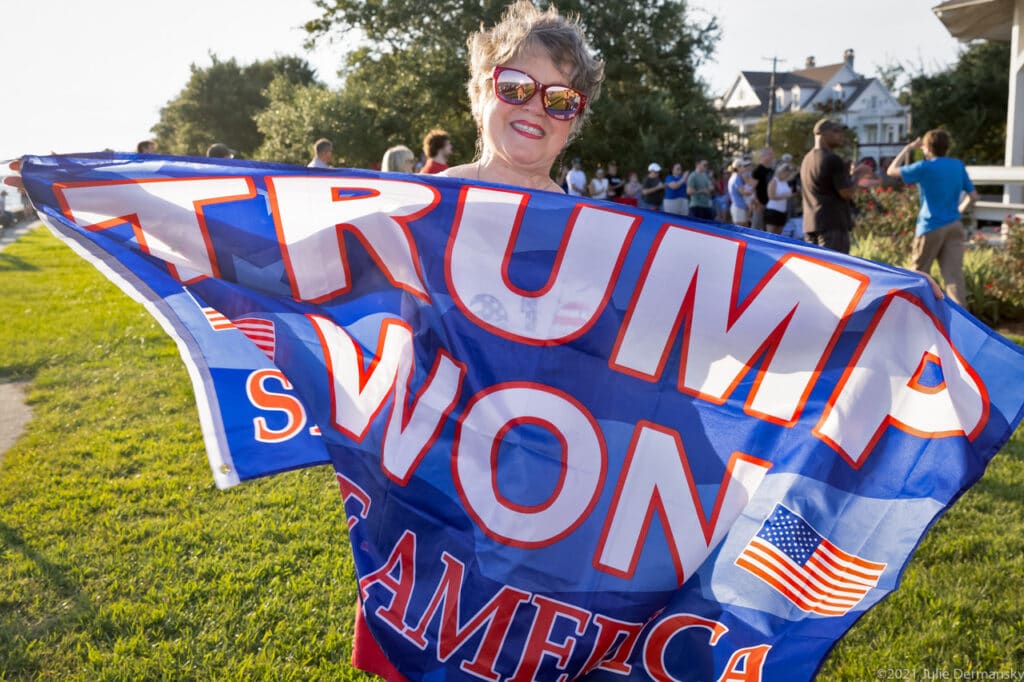 One of many flags falsely claiming Trump won the 2020 election, seen at the ‘Freedom Rally’ in Mandeville on August 14. Credit: Julie Dermansky

At the recent rally and school board meetings in Louisiana, support for former President Trump was in plain sight on hats, t-shirts, and flags claiming Trump won the last election.

Earlier this month, both on August 10 at a school board meeting in Central, Louisiana, just south of Baton Rouge, and at the August 12 school board meeting in St. Tammany Parish, parents expressed their fury about the state’s mask mandates in schools.  Some parents equated the mandate to child abuse, and others referred to the policy as a “crime against humanity.”

The U.S. Centers for Disease Control and Prevention (CDC) updated its guidance on COVID-19 prevention in K-12 schools on August 4. The agency now recommends masks be worn by everyone entering schools regardless of their vaccination status. “The evidence is strongly supportive that universal masking in schools is one way to keep children safe,” Mercedes Carnethon, an epidemiologist at Northwestern University Feinberg School of Medicine, told the Los Angeles Times.

Many at the rally and at the recent school board meetings, however, believe that no proof exists that wearing masks stops the spread of the coronavirus. They see mask mandates and calls for proof of vaccination as fear tactics that are meant to strip Americans of their freedom.

A 2020 DeSmog investigation found that a number of groups behind protests against pandemic stay-home orders are also part of the climate change countermovement, a term coined by sociologist Robert Brulle. U.S. Senator Sheldon Whitehouse (D-RI) has called this network of individuals and organizations disputing climate science the “web of denial.”

At several school board meetings across Louisiana, parents pleaded with the school board to give them the right to choose what is best for their children. 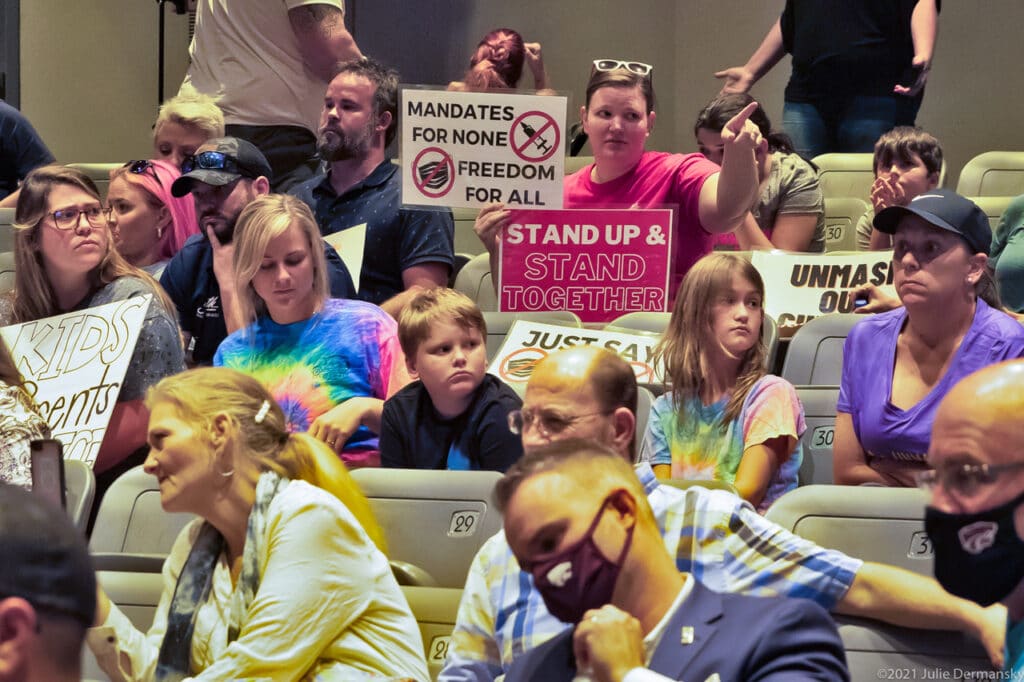 A mostly unmasked crowd filling a Central School Board Meeting on August 10 despite the state’s mask mandate. Credit: Julie Dermansky 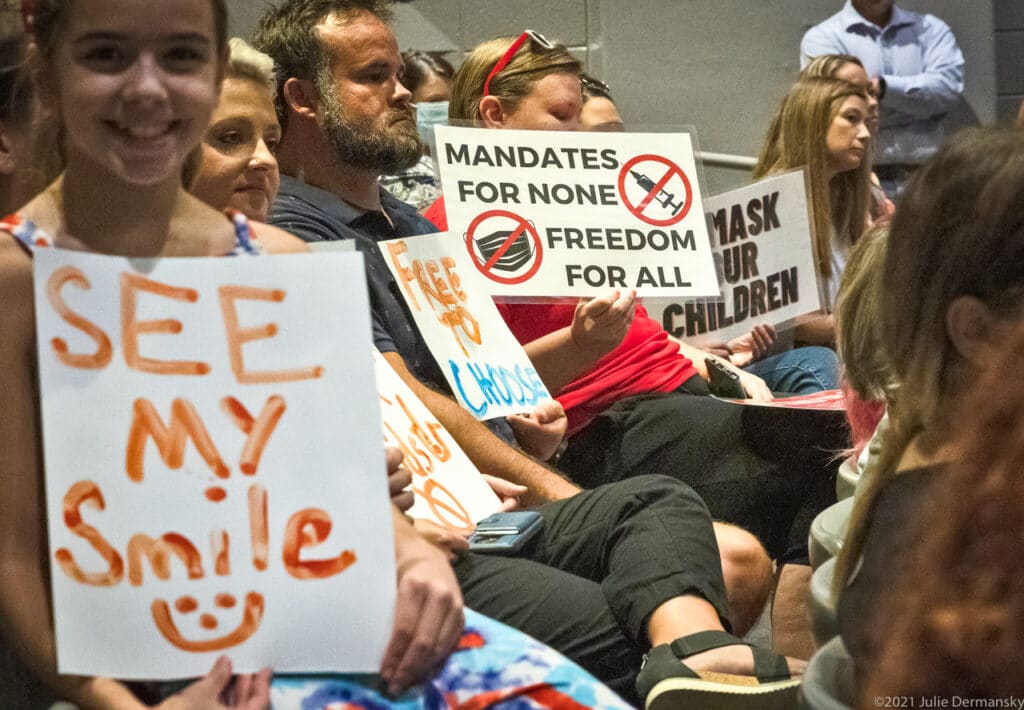 Parents with their children at a Central School Board Meeting on August 10. Credit: Julie Dermansky

“The cry of segregationists for a century was separate but equal but just as in segregation days, we learned last year that separate was not equal. The virtual students did not receive the quality education,” Kim Powers, one of the parents who spoke at the August 10 Central School Board meeting said. “My daughters are normal and they’re healthy — they deserve to sit in a classroom, in a normal classroom, and have the rights every American has— the right to breathe free.”

And at a St. Tammany Parish School Board meeting on August 12, Heather Watkins told the school board that she believes we can all agree that oxygen is needed for humans to survive. 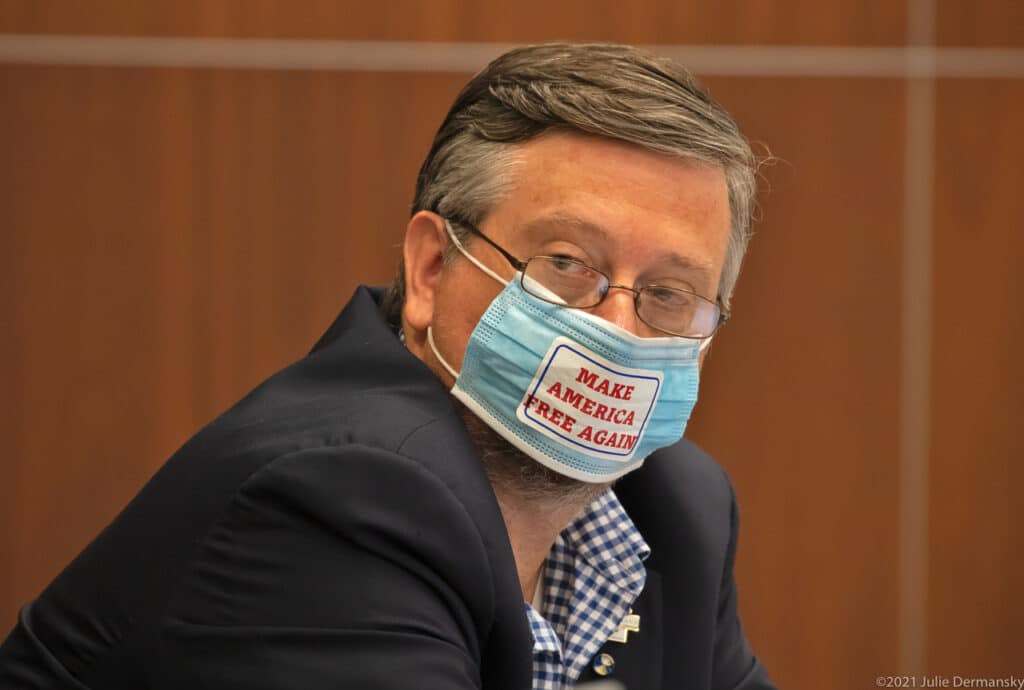 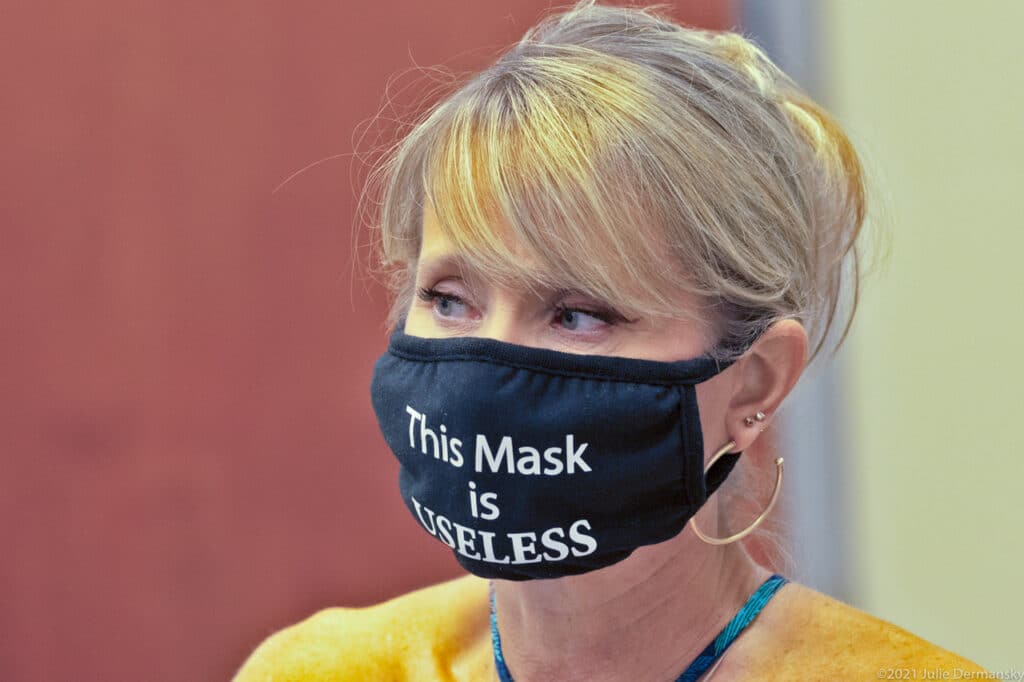 “In my opinion, anyone that can be convinced to put on a face-covering that provides you of less oxygen can and will be convinced to do anything. With that said and still no proof that face coverings provide any protection from the spread of virus, you will never convince me that depriving our students, my children, from fresh oxygen is saving them from anything. It is harming them,” Watkins said, pleading with the board to fight this mask mandate.

However, the medical community widely disputes these claims. The possibility of both exposure to COVID-19 and community spread in schools is greatly decreased when everyone wears masks in schools. While a mask can cause discomfort and even make a child anxious, protecting that child, and others around them, from the coronavirus far outweighs that discomfort, medical experts broadly agree. And while COVID-19 is generally mild in children, hospitalizations and deaths are rising and the long-term impacts even of mild cases may be significant, reports CNN.

Others at the Louisiana school board meetings falsely claimed that requiring proof of vaccine for entry into places is a violation of the Nuremberg Code, ethical principles established in the aftermath of human experiments during the Holocaust. Their claims were alluding to New Orleans Mayor LaToya Cantrell’s mandate requiring proof of vaccine or a recent negative test result for COVID-19 before entering restaurants and many public venues starting on August 16. 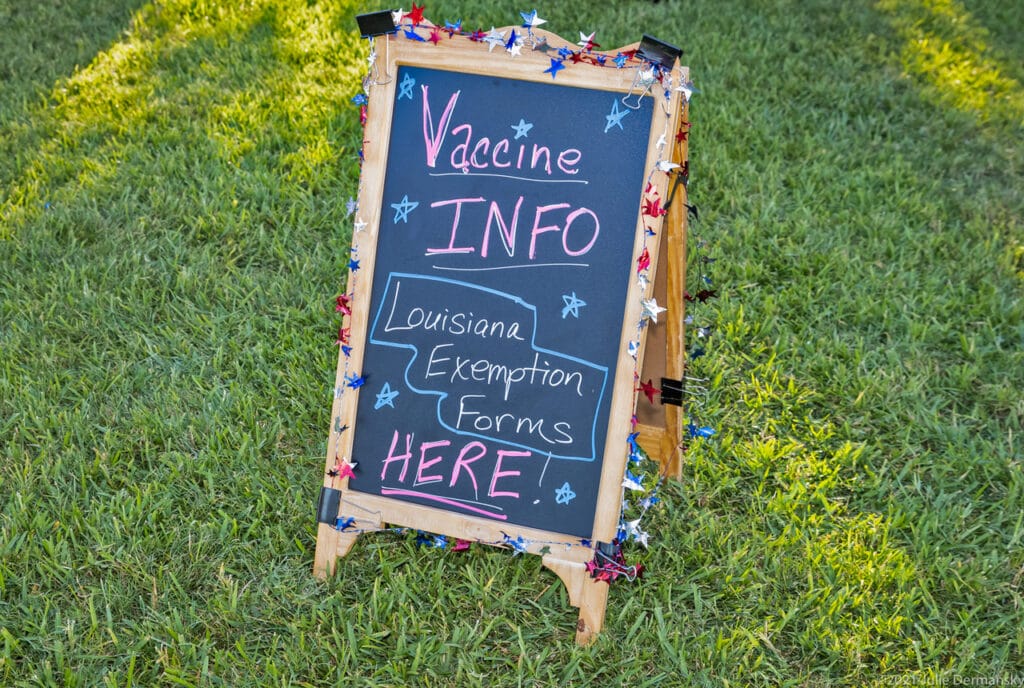 Sign near a table with information forms about how to receive exemptions from the state’s mask mandate at an August 14 ‘Freedom Rally’ in Mandeville, Louisiana. Credit: Julie Dermansky

After the meeting in St. Tammany, the school board requested the state Board of Elementary and Secondary Education (BESE) make wearing masks voluntary in St. Tammany schools. BESE was expected to weigh in on this request during its August 18 meeting. However, today, BESE voted 8 to 2 to adjourn the meeting in Baton Rouge without coming to a decision after many of those attending refused to comply with the requirement that anyone in a state building wear a mask. Before the meeting was abruptly shut down, audience members were arguing among themselves about whether or not to comply in order for the meeting to proceed.

Those packing the room were primarily there to speak out against the mask mandate as it applies to schools. They said they want parents, or at least their local school boards, to have the power to decide whether to require masks in public schools.

Meanwhile, the number of American children infected with COVID-19 continues to grow, with more than 215,000 new cases — a 5 percent increase — in the first two weeks of August, according to the American Academy of Pediatrics.

8/18/21: This story has been updated to correct its references to the city of Central, Louisiana.