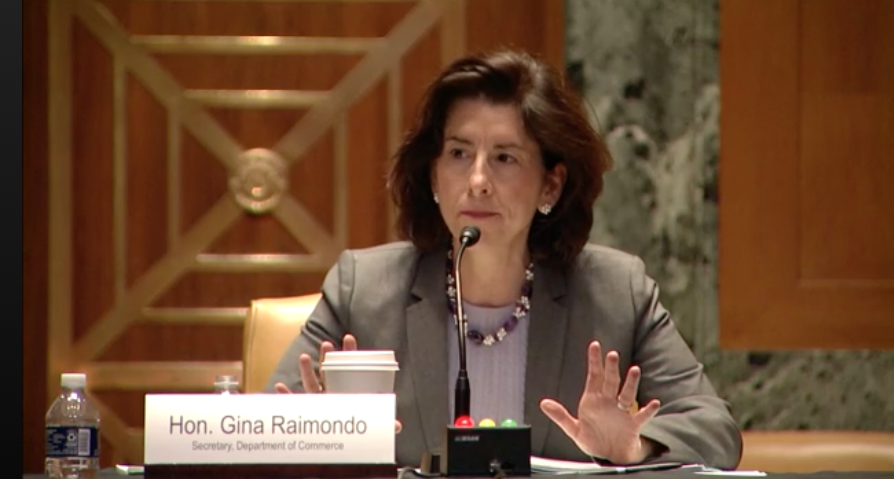 Commerce Sec. Gina Raimondo testifies before a Senate Committee on Appropriations subcommittee on May 11, 2022.

Speaking before a Senate subcommittee, Commerce Secretary Gina Raimondo said the chance of her agency implementing a 200% tariff on solar modules implemented from Southeast Asia is "exceedingly unlikely."

Raimondo's testimony before the Senate subcommittee on May 11 came as lawmakers on both sides of the aisle have questioned Commerce's investigation of the Auxin Solar tariff petition. The petition alleges that modules imported from four Southeast Asia countries -- Malaysia, Thailand, Cambodia, and Vietnam -- are skirting trade duties against China.

The Factor This! solar podcast is available wherever you get your podcasts. The podcast launched with an in-depth, four-part series on the Auxin Solar tariff petition, including an exclusive interview with Auxin Solar CEO Mamun Rashid. Listen and subscribe today.

The investigation has brought the broader U.S. solar industry to a standstill amid the threat of retroactive tariffs that could be applied to modules imported after April 1. More than 70% of the U.S. solar module supply is imported from the countries in question.

"You hear a 200% tariff, and I really want to address that," Raimondo said. "It is true that Commerce would be permitted to impose a tariff at that excessive level. That is exceedingly unlikely, which is to say that that level of a tariff is only reserved in outside cases where you can't tell the difference between the company and say the Communist Party of China.

Raimondo said she shares concerns of the solar industry and climate advocates alike that additional tariffs on module imports could hurt clean energy development goals. She vowed to carry out the investigation as fast as possible, but added that she respects the role of regulators and will "make sure that they have the freedom to do their job."

The Solar Energy Industries Association was quick to respond to Raymond's testimony. It issued a statement from its president and CEO Abigail Ross Hopper that said, "the American solar industry needs clarity from the Commerce Department, not further obfuscation and tumult.”

The statement said that solar cell manufacturing occurs in many stages and "will continue to be a global operation until the United States makes serious investments in domestic manufacturing."

Raimondo testified before a Senate committee on April 27 that her "hands are tied" when it comes to investigating the Auxin Solar tariff petition. A petition that meets the five requirements under federal law requires an investigation, she said at the time.

She reiterated that stance on May 11. Raimondo was asked by Sen. Jerry Moran (R-Kansas) what could be done to keep this kind of investigation -- one launched by a small company, not reflecting the views of a broader industry -- from happening again.

Subscribe today to the all-new Factor This! podcast from Renewable Energy World. This podcast designed specifically for the solar industry launches May 9th with a deep-dive breakdown of the Auxin Solar tariff petition, including the impact to PPA markets and corporate net-zero targets.

"Can you help? That's, of course, your decision. But were you to implement some discretion, then we could implement it according to those changes," Raimondo said.

Energy Secretary Jennifer Granholm has likewise faced pressure from lawmakers over the investigation. President Joe Biden has been blamed by the solar industry, and some lawmakers, for turning his back on renewable energy and climate goals for allowing the investigation to take place.

Granholm said that the U.S. solar industry is at risk of crumbling under the Commerce investigation and, potentially, additional tariffs. She said in testimony on May 5 that Biden's own goal to achieve 100% clean electricity by 2035 could also be in jeopardy if the case isn't resolved quickly.

"At stake is the complete smothering of the investment and the jobs and the independence that we would be seeking as a nation to get our fuel from our own generation sources," Granholm said. "I certainly am deeply concerned," she said while acknowledging that the investigation is underway at a separate federal agency.

Commerce has sought to more clearly define the scope of its investigation into the Auxin Solar tariff petition.

In a memo dated May 2, Commerce trade analysts requested comment from "all interested parties" on any requirements that may be put in place in the event of an affirmative preliminary or final determination.

Commerce also sought to reiterate that wafers produced outside of China with Chinese-sourced polysilicon are not subject to the trade case, since several critical stages are included in the wafer production process.

However, the case does center on Chinese-origin wafers used in the completion of solar cells or modules in Vietnam, Thailand, Cambodia, and Malaysia that were supplied by a Chinese manufacturer with a company-specific rate.

Commerce is expected to issue a preliminary finding on the Auxin Solar tariff petition within 150 days of launching the investigation, which began on March 25. Even before a ruling is issued, however, the solar industry has warned that more than half of expected projects for 2022 could be delayed or canceled because of uncertainty and fears of retroactive duties.

This story was updated May 11 to include a comment from the Solar Energy Industries Association.

Source: https://www.renewableenergyworld.com/solar/commerce-secretary-200-solar-tariff-exceedingly-unlikely-in-auxin-case/
We use cookies to ensure that we give you the best experience on our website. If you continue to use this site we will assume that you are happy with it. Ok