Assessing AD/CVD: The impact of the circumvention trade case and bleak outlook for U.S. solar market

Three-quarters of solar companies say that solar panel deliveries have been canceled or delayed in the wake of Department of Commerce initiating Auxin Solar’s anti-dumping circumvention case. That stat comes from the preliminary results of a survey conducted by the Solar Energy Industries Association (SEIA). SEIA hosted a webinar April 5 to discuss the survey results and Commerce’s decision timeline. Here are the biggest takeaways.

What is the timeline of the Commerce ruling? 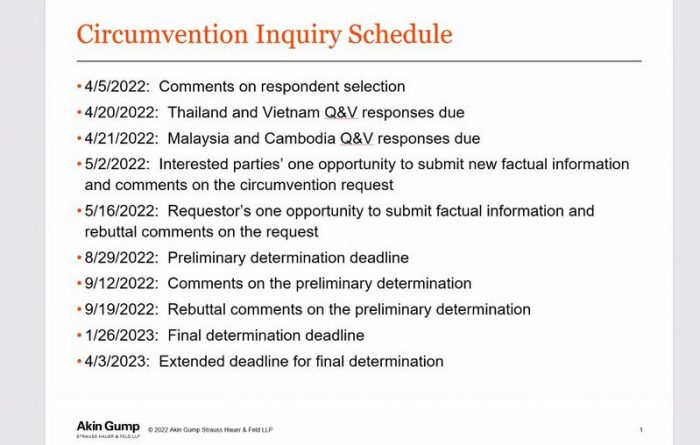 Julia Eppard, Counsel with Akin Gump Strauss Hauer Feld LLP, noted Commerce has substantial discretion and believes they “will have information to make a decision as quickly as possible. We believe they could reach a negative determination before [their deadline].

For a bit more on the timeline, head to this article.

Why are there delays and cancellations when Commerce hasn’t made a ruling yet?

Initiating the case to investigate Auxin’s claims about solar cell production in the Southeast Asia (Cambodia, Malaysia, Thailand and Vietnam) means a positive ruling is possible – and any duties imposed in such a ruling are “retroactively imposed on any shipments made as of the published initiation date (April 1).” This is why many companies have decided to already stop shipping. (There’s also the possibility of the retroactive date going back to Nov. 4, 2021.)

“Those are not final duties because the ultimate duty liability in an anti-dumping case is determined in the administrative review process,” stated Matt Nicely with Akin Gump. “But given the complexity of this case, we at this point, do not know how an administrative review of a given company in China is going to be handled in regard to its affiliates or customers in Southeast Asia. The risk here is those retroactive cash deposits and later on when those duties become final. Even if reduced, they are a potential significant liability.”

How much of the U.S. solar industry is affected? 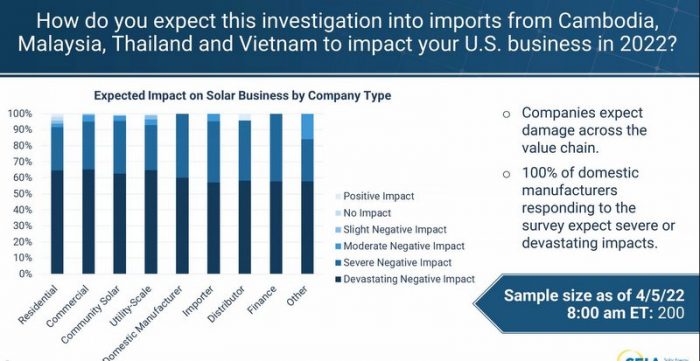 The SEIA survey is an early snapshot of the harm more than 200 companies are experiencing as a result of the Commerce Department’s investigation (of the 200, 50 respondents work in residential solar, 100 in commercial, 100 in utility scale, and 20 manufacturers, with some obvious overlap.)

More than 90% of the companies polled said that the Commerce Department’s actions are having a “severe” or “devastating” impact on their bottom line. Two-thirds of the companies surveyed reported that half of their workforce was at risk and one-third of companies said their entire workforce was at risk. SEIA estimates that as a result of this petition, the solar industry will lose 70,000 out of its 231,000 jobs.

The energy storage industry is financially tied to this decision too because to be eligible for the investment tax credit, storage systems need to be tied to a solar project.

“On behalf of 231,000 American solar workers and thousands of American solar companies, we are calling on Commerce to immediately issue a negative preliminary determination,” stated SEIA CEO Abigail Ross Hopper. “There is no basis for this petition.”

What is the main argument against the petition?

To prove circumvention under U.S. law, the work to create a product in a particular country must be minor and insignificant. This means the process of turning ingots and wafers into solar cells would need to be deemed an insignificant part of the PV module manufacturing supply chain.

SEIA’s position is that would seem hard to prove considering the importance of cell production and the billions of dollars invested in the manufacturing base of Southeast Asia. This point was also brought up by MJ Shaio with LONGi Solar in a recent Solar Builder interview. Chinese-based companies aside, cells manufactured in Southeast Asia are also crucial to U.S.-based PV module manufacturers.

This chart also underlines the point of CSPV cells not being a “minor” or “insignificant” piece of the PV puzzle. 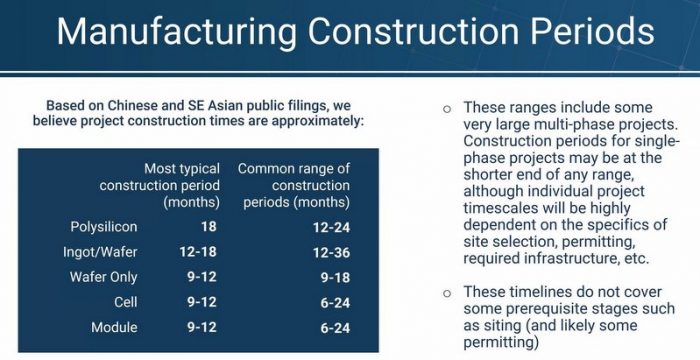 What about domestic solar module supply?

Citing those facilities as circumvention and placing duties on CSPV cells produced in Southeast Asia would not stimulate much new domestic solar module demand in the short or even immediate term, considering that above chart and these stats:

“Our domestic module supply is not adequate for the growth we had expected for the solar industry. This year, our module supply is going to run at least 8 GW low,” stated Justin Baca, Vice President of Markets and Research, SEIA, also noting Wood Mackenzie is estimating as much as 16 GW short of supply over the next few years.

So, the United States will need more plants to produce CSPV cells, but that will require a ton of capital and time — or, of course, government incentives, which remain stalled in Congress. The legislation, which is being considered under budget reconciliation, would establish a robust solar manufacturing supply chain that would make the United States less reliant on products from overseas.

“We’ve said that tariffs are not the right way to incentivize manufacturing, and that it is going to take time and policy commitment to move manufacturing into the United States at the scale that’s needed,” Hopper said. “The countries named in the petition have been reliable trading partners, and we need their products, in the near term at least, while we fight to establish a sustained and powerful manufacturing presence here in America.”

Also worth noting the 20 manufacturers in the SEIA survey all said this Commerce decision will be devastating or severe for their business, which runs the gamut from PV module manufacturers to racking manufacturers.

What are some other ripple effects for solar installers?

The vast majority of installers and EPCs are already seeing stopped shipments and delayed projects, and thus will need to find alternative supply. Residential and CI solar installers buying through distribution may not yet be feeling the direct impact as distributors work through inventory, but that is likely to change in the coming months.

Even if there is enough supply, that will make for a chaotic market. And remember, other countries are using CSPV cells from these Southeast Asia countries too, which until ruled otherwise, ties them to this uncertainty.

“One thing that I’ll make this worse than in normal times, trying to find alternative module supplies, three-quarters of the industry has already gotten notification that there is a problem with their supply. Which means everyone is going to rush to other suppliers who they think might not be affected, but even imports from other countries – like a module assembly in India or Turkey, if they are getting cells from the four named countries here, they also are at risk. Some of this just hasn’t really trickled down yet.”

We have a ton video interviews and additional content on our YouTube page. Recently we debuted Power Forward! -- a collaboration with BayWa r.e. to discuss higher level industry topics as well as best practices / trends for running a solar business today.

Our longer running side project is The Pitch -- in which we have awkward discussions with solar manufacturers and suppliers about their new technology and ideas so that you don't have to. We've discusses everything from residential rail-less deck attaching and home solar financing to large-scale energy storage value stacking and utility-driven new home solar + storage microgrids.

We also post our Project of the Year announcements there! Interviews with this year's winners will be up starting the week of Nov. 8. Head there and subscribe today to stay on top of all this extra stuff.

Source: https://solarbuildermag.com/news/assessing-ad-cvd-the-impact-of-the-circumvention-trade-case-and-bleak-outlook-for-u-s-solar-market/
We use cookies to ensure that we give you the best experience on our website. If you continue to use this site we will assume that you are happy with it. Ok